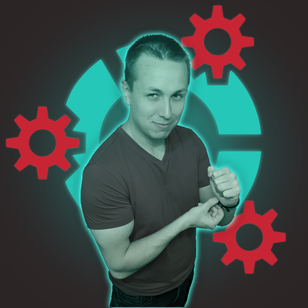 I am the go person for understanding the multidisciplinary life of people, and seeing how the connections/systems come together.

This feels like a dating question, why should I use my time with you? Well that is just the thing isn't it, for you want to #makeachange in your life quickly. To not use too much of your time, and I can help you learn quickly. I've been told that I am a stockreel of information, and that my multidisciplinary lifestyle also helps gain the dynamic and multifaceted point of view. With those I can help you see the innovation next to you!

Want to meet, greet and exchange some knowledge one-on-one? Want to spend 30 minutes asking me what I do, why I do it, and what I am working on? Want to discuss the purpose of our existence and what is next? Want to try and learn and feel something new through conversation? Now is your chance.

(*) This offer is part of the "Meet the World's People" Program; a one-of-a-kind program that was built, designed, and curated to get you, and thousands of others, meeting, greeting and talking to new and interesting people from all around the world. To join in on the fun sign up here: https://www.pickmybrain.world/meet-the-worlds-people.

A unique 30 minute over the phone opportunity for you to:

A unique 60-minute opportunity for me to help you discuss your:

Would you like me to speak at your organization, event, workshop, conference? I'd love to. My minimum speaking stipend starts at $1,500 and can go upward to $15,000 depending on the specs.

This is to sign up for an interview on The Polymath PolyCast. You will receive an email with the questions and riverside.fm link about a day before.

For preparation I encourage you to check out the page I made for guests: https://polyinnovator.space/polycast-guest/

I am the go person for understanding the multidisciplinary life of people, and seeing how the connections/systems come together.

This feels like a dating question, why should I use my time with you? Well that is just the thing isn't it, for you want to #makeachange in your life quickly. To not use too much of your time, and I can help you learn quickly. I've been told that I am a stockreel of information, and that my multidisciplinary lifestyle also helps gain the dynamic and multifaceted point of view. With those I can help you see the innovation next to you!

⚠️As an aspiring #polymath, I created #PolyInnovator as a foundational means to build out the various careers I want out of life (A #Polymath of #Innovation if you will). I'm on a mission to create a Modular Education Platform to revolutionize how we approach education as whole. #ModularDegree 🎓

Growing up I always knew that I didn't fit into the regular role, and even from a young age I had an entrepreneurial spirit. Even having a business when I was ten selling temporary tattoos, and growing into the idea of becoming a CEO. As a teenager the audacious mindset took over, and I would say "I will become a CEO of an international company driven to innovate 💻technology and 📜ideology!"; A bold statement in of itself, even more so coming from someone so young.

That eventually evolved into what I called the 🌐United Living Construct, an innovation 💡 hub, and my first dive into content creation. Creating it into a blog and 🎙️podcast, which would teach me about social media marketing and content creation for written/audio formats way back in 2011/2012. However the podcast wasn't until 2017!

When I realized an organization or company type of endeavor wasn't going to work at that stage in my life, particularly due to much learning to be done on my part; I then pivoted to creating a personal brand, or online reputation around my own name. Ironically I care more about the ⚙️PolyInnovator name of mine, rather than my actual name.

I initially focused on both, while pursuing my own self-education through what I called the 🧰Do It Yourself Degree. With a little bit of change happening in that personal endeavor, I made it become what is now known as the Modular Degree. A system meant to be change, and to evolve alongside your own ever changing life. Your learning needs will change, so why shouldn't your education? 🧬 (Hmm maybe I should write that down!)

🌊🌊🌊🌊
All the while I had been working for my local city via recreation department, starting out as a lifeguard then pool manager, but more so the fitness teaching became my world. I have been teaching swimming for the better half of a decade, and realizing that I could teach even Michael Phelps something new. (Note: My current content phase for PolyInnovator is around Swimming) 🏊🏼

Around the same time I started managing I also became a water aerobics instructor, and for nearly 7 years I have been teaching anywhere from 5 to 13 aqua fitness classes a week. Water aerobics, AquaStrength, Move Your Joints, and even water boot camp!! Not including swimming, personal training, etc. I recently as of August 2021 put in my resignation for that role. To focus on creating content, as well as changing to a more stable income.

I even became a personal trainer after a long time of Aqua fitness, and a decade and half of personal fitness training. Self-taught knowledge allows for a real experience that you can't get in a textbook, but do note I did read the textbooks too! 😉

The Digital Frontier 📡
I have organized my life via a tool called Notion, a digital formatting system with blocks. Creating databases, documents, kanban, and a very even Life Operating System as a great creator August Bradley calls it. I've called it my PolyInnovation Operating System. For pursuing content creation, learning with the Modegree, and even tracking my whole life.

So both Notion and Omnichannel Content Marketing are areas you can ask me about! Not to mention fitness of course!!

The PolyInnovator concept, is based around the Self-Education core. It is derived from the need of new age polymaths. This dynamic “occupation” you could say, would create a new synergy in a plethora of fields. The need of these kind of “Jack of all Trades” people is ever rising. The goal of the PolyInnovator as a personal brand is to instill the mindset, and give the tools for the people who could see themselves becoming greater than they could have before.

Granted it takes a certain level of mental discipline, as well as strong self-awareness. Of which can be cultivated over time, especially with online content in this day and age. Once that has been built up, then the process of information products being sold to the customer can begin. The great thing about it is that since they were created with the prospect of creating a change in that person’s education in mind, that the potential benefit is immense.

At this point in time I've probably taught over 1000 people to swim to some degree, and I aim to increase that exponentially via the digital mediums.

I have used most project/task management tools, and fell in love with Notion.so ; Creating my own Life OS, Or PolyInnovation Operating System in my case. That includes an Omnichannel Content Production system, Modular Degree organizer/framework, as well as many other facets of life all into one great build.

As for fitness I've been trying to push my limits over the past few years. That being doing 300 push ups in one workout (not in row!!), 100 reps of 100lbs bench press and squats, 340lbs squats x3, 51 hanging crunches, and much more.

🎥 As an #OmniContent Creator as I call it, I create omnichannel content across a multitude of platforms. From written, to visual, to video, and even audio. This is one of my main series that I have started making. It has been on hold for a bit while I focused on the interviews. However the goal still remains to create daily content through this series!

🚫As someone who has never accepted the common path of life, I have always aimed for greater and bigger challenges. I seek to become something of a Polymath. To never stop learning, and to never back down. I will be successful in my endeavors, and will be a future world leader. 🗺️

Read, listen to, and/or watch this:

TO SHARE
This next one is one of my own, but I created it to distill everything I could about OmniChannel Marketing. It is something I check in with myself to see when I forget something!
https://polyinnovator.space/how-to-go-omnichannel/

I've been an avid karaoke conquistador as they're called where I'm at, for nearly 7 years. I used to go religiously so I could teach myself how to sing. Even now I strive to do hard songs, even pulling off Bohemian Rhapsody by myself (highs and lows). NOTE: I could not talk for 2-3 days! 😂😂

I even started running Karaoke from time to time!

I want to learn more about:

Dustin is high energy, active, knowledgeable, curious, and creative. The best way to get a deeper understanding of Dustin's knowledge is to book a chat with him 1:1 and ask him to enrich your knowledge when it comes to - n...