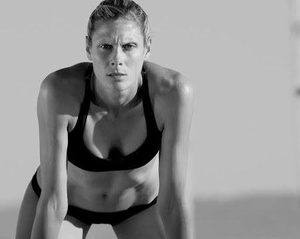 Hello! My name is Sarah Pavan. I am a Canadian professional indoor volleyball player and beach volleyball Olympian, going for GOLD in Tokyo 2020. I have represented Canada both indoor and on the beach since 2001, and have lived all over the world playing volleyball as a career.

I love helping people pursue excellence and be the best they can be, both in and out of sport. I want people to live their dreams, and if I can facilitate that, whether it be through sharing my experience, mindset, or technical approach to volleyball, I can think of nothing more rewarding :)

I AM OPEN AND UP TO TALK ABOUT ANYTHING! From technical and tactical concerns, to mindset or interpersonal questions, I am an open book! My aim, by the time we finish our call, will be to pass on some of my experiences, as they relate to our conversation, as well as some high-level strategies, mantras, and behaviours that you can implement in your own life right away.

These are great for anyone who is interested in setting aside some time to learn more about my personal high-level takeaways conversationally.

*Pick My Brain calls are a great way to connect, be curious and converse purposefully over the phone with no expectations, other than to learn a little bit about one another.
*Available for 5 Pick My Brain Calls a Month

Book Sarah for a Coffee & Conversation

Prefer to meet face-to-face? “Coffee & Convos” offers the same perks of a "Pick My Brain" call only this time we get to meet up online to talk about whatever you want.

*Available for 5 Coffee & Convos a Month

Are you interested in pursuing an NCAA Volleyball Scholarship, but don't know where to start? I can help you navigate the process and connect you with the coaches and schools that are the right fit for you.

Book a Pick my Brain Call (above) for a FREE "Get to Know You" consultation. Then, if you feel that the NCAA is something you want to pursue, book me here, and I can be your guide and contact through the recruiting process. This package includes a personalized recruiting plan with intros and contacts to coaches, a highlight video, and a monthly schedule for emails, calls, and follow-up to ensure that you go to a school that is right for you.

Playing in the NCAA changed my life and prepared me for a great professional career. I hope it can do the same for you!

*To get the free consultation, enter the discount code "ncaahelp" at checkout for the Pick my Brain Call.

Interested in bringing me in as a special guest coach for your volleyball league? Club? Organization?

Let’s collaborate! Book a Pick my Brain Call (above) for a FREE consultation. As soon as we land on the details, you can book me here so we can formally put it in both of our calendars. I genuinely love coaching, playing, and meeting other players, so please feel free to make custom requests.

*To get the free consultation, enter the discount code “coaching” at checkout for the Pick My Brain Call.

Want to bring Sarah in to speak to your group about mindset, high-level behaviours, team-building, growth?

Book a Pick my Brain Call (above) for a FREE consultation. As soon as we land on the details, you can book me here so we can formally put it in both of our calendars. Please feel free to make custom requests.

*Travel not included
*To get the free consultation, enter the discount code “speakinggig” at checkout for the Pick My Brain Call.

Aside from actually practicing, studying your own game and practice film can really help your game out. Professional teams from all sports spend 100’s of hours analyzing themselves on video from workouts, practices and competition, including me.

Film a practise or a match with your phone or camera. Upload the footage and send the link to me once you submit your payment and I will give you a pre-recorded detailed and custom breakdown and review of your footage within one week. I will watch your film and highlight where things go wrong and right and areas for improvement. I'll comment on offensive and defensive systems, strategies, overall performance, execution and decision making. In essence, I'll coach and critic you from a far.

Hello! My name is Sarah Pavan. I am a Canadian professional indoor volleyball player and beach volleyball Olympian, going for GOLD in Tokyo 2020. I have represented Canada both indoor and on the beach since 2001, and have lived all over the world playing volleyball as a career.

I love helping people pursue excellence and be the best they can be, both in and out of sport. I want people to live their dreams, and if I can facilitate that, whether it be through sharing my experience, mindset, or technical approach to volleyball, I can think of nothing more rewarding :)

To to mentor/support volleyball players of all skill levels in reaching their potential.

Anyone who sees value in connecting with an Olympic athlete.

Reach out if you want to:

Feel free to also book a session if you want to ask me about:

What I am currently working on

What success means to me

How I got to where I am today

What I enjoy most/least about my career

What it is like to live and work in my city

Recommendations for anyone entering my career or industry

Issues I care most about right now and why

> I am one of the only people in the world to have played both indoor and beach volleyball at the highest level.
> I love sharing what I've learned, and am learning along the way, with others.
> I know that pursuing excellence is a process, and I believe in honesty through the hard-to-navigate moments.
> I have played with A LOT of different people, and have gained valuable insight in how to manage teammate and coach relationships.

A little bit about myself:

In the volleyball world, I have done it all :) I started playing the sport when I was 10 and at 16, I became the youngest woman ever selected for the Canadian National Indoor Volleyball team.

I attended the University of Nebraska on a volleyball scholarship and won the NCAA National Championship with the Cornhuskers in 2006. While there, I was a 4-time First-Team All-American (one of 5 people ever), 2006 National Player of the Year, and Honda Cup winner, as the Collegiate Woman Athlete of the Year, in 2007. I was recently inducted into the University of Nebraska Athletic Hall of Fame, and had my jersey retired.

After college I played indoor professionally for 10 years around the world, while continuing to represent Canada on the indoor team internationally. I played in Italy, Brazil, South Korea and China. I was a 2-time Superliga Champion with Unilever Rio de Janeiro and the CEV Champions League Best Attacker.
​
In 2013 I started playing beach volleyball with the objective of going to the Olympics. Not only was I able to attain a life-long dream of representing my country at the Olympics, but I brought home a 5th place finish for Canada in Rio 2016. Since then, my current partner and I have reached the #1 world ranking and are Commonwealth Games champions. I am a 2-time FIVB World Tour Best Blocker, and 3-time gold medallist.

Where else you can find and follow me online:

Blog: Mental Blocks in Athletes and How to Overcome Them

Blog: What Will Your Teammates Remember About You?

Blog: Is Being Tall a Prerequisite for Being a Good Volleyball Player?

Sarah was an absolute pleasure to talk to, informative, patient, and knowledgeable. I wanted to learn about how the pro volleyball industry functions and serves players as a labour market, which is not the typical sort of ...

“Confidence. Ego. Mantra's. Head Space. Motivation. Routines. About to graduate to the next level of business and startup and find myself wanting to talk to high achievers about these things. I don't have time for self d...

Went down to Hermosa to play some beach volleyball with a group of ladies and found out Sarah was open and available to run a training session for us!?!

Talking with Sarah was an amazing experience! Her openness made conversing easy and her energy made me feel comfortable to ask what I was genuinely curious about. She really went above and beyond on her side of the call, a...

Sarah is one of those kinds of people that you feel like you've known for years even though you've only just met them.

I'll admit, I was a bit star struck and nervous the first time I met her, but as soon as we started...